November 04, 2017
Unless we train the FEELINGS and the CHOICE, our man is not educated. He is only decked out in certain intellectual tricks that he has learnt to perform. By these tricks he can earn his bread. He can not appeal to the heart, or give life. He is not a man at all; he is a cleaver ape. - Sister Nivedita
3 comments
Read more

November 04, 2017
How a fiery Irish school teacher, inspired by Swami Vivekananda, helped liberate India When a great man has prepared his workers, he must go to another place, for he cannot make them free in his own presence. I am nothing more for you. I have handed over to you the power that I possessed; now I am only a wandering monk." With these stirring words, the mighty colossus, Swami Vivekananda, sent his great disciple, Sister Nivedita, into the battlefield of India's freedom struggle. She was to seek not only political freedom, but freedom of the spirit as well. Born on October 28, 1867, at Dungannon in Ireland, Miss Margaret Noble, as she was known in her youth, belonged to a family of Irish freedom fighters. A school teacher by profession, she came under the spell of Swami Vivekananda following his epoch making appearance at the 1893 Parliament of the World's Religions at Chicago. Five years later, she traveled with him to India. There she was initiated on March 25, 18
Read more 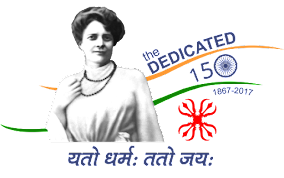